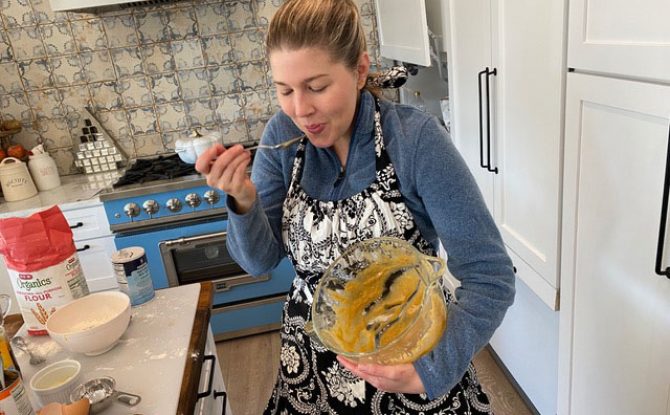 It’s Cooking Light’s Fault. (Aka: how I was trying to solve a problem all wrong)

When I married my husband, he was really good cook. I could feed myself but I was not (okay, I still am not!) what anyone would call a really good cook. I am the person who lit the toaster oven on fire when I was in college! Apparently, too much cheese dripped down into the coils. But the good news is I learned how to use a fire extinguisher that day! That’s a life skill.

When my husband and I got engaged, I thought, “I am going to learn how to cook. I think that would be a good skill for me to have. I’m going to learn how to cook.” I started taking cooking classes. I learned how to roast a chicken. I learned how to hold my knives, learned the most efficient way to chop an onion. I felt like a real grown up. My cooking got incrementally better with practice, but it was still just… okay. I was practicing all the time – I worked fewer hours than he was, so I’d pull out the Cooking Light magazine and cook us dinner most nights a week. He’d cook about once a week, and his food was just better than mine. Significantly better. He was so confident in kitchen, and his food was so full of flavor.

And then we went on our honeymoon.

We ended up in Italy, where I ate 5 meals a day, 4 of them pasta. Our first Sunday home after we got back from Rome, we were grocery shopping. There, at the checkout, was a copy of Gourmet Magazine: “The Pasta Issue.” And the photo on the cover was of penne salsiccia, which I’d had a LOT of in Italy. I thought to myself, “Oh, this is a sign.” I threw that magazine down on the conveyor belt and committed to reading it cover to cover.

The next Sunday, I had my grocery list ready. I was going to make that Penne Salsiccia from the cover. I was so excited. My husband and I were going around the grocery store shopping. We pick up the sausage. We pick up the cheese. I grab the heavy whipping cream. It was when I was putting the heavy whipping cream in the cart that he looks at all the heavy ingredients, looks back at me and he goes, “Is this from Cooking Light?”. Since that’s where almost all of my recipes came from, he was surprised.

I said, “No, this is not from Cooking Light. This is from that gourmet magazine. We’re going to make real Italian pasta like we had on our honeymoon.”

That evening, I was so excited to get started.

6pm. I’m starting dinner. This recipe calls for VERY expensive, very fragile threads of Saffron to be soaked in water. I’m trying not to panic.

6:28. I’m trying not to scald the heavy whipping cream in the pan.

6:52. I carry the plates out to the table. I set them down with a deep breath. For a moment I consider letting my husband take the first bite and tell me what he thinks but then I think FORGET THAT THIS WAS MY IDEA I MADE THIS MEAL. I put the bite in my mouth and I turn to my husband in shock.

I can’t believe what I’m tasting.

Here’s what I realized: I had a materials problem. I had been trying for years to solve it with more skills training.

I’m sure nothing like that has ever happened to you has it? No workplace of yours would EVER try to solve a materials problem with more skills training, right? <wink, wink>.

But that’s what happens when we jump to solve a problem too quickly, “Oh, I know what the problem is. I know what the problem is.” Action bias is a common impulse. It’s a feeling of being compelled to act quickly and solve a problem, and psychologists think it happens in order to regain a sense of control over a situation. There’s a cultural conditioning that can occur, where we learn as children to favor action over waiting, because waiting could be interpreted as “laziness” or “indecisiveness.” So action bias isn’t just internal – there’s a lot of societal pressure to take action! In some cases, we can even be rewarded tangibly for being the kind of person who leaps to action and solves problems quickly.

If we want to thrive and be successful in an uncertain environment (like we’re all in in 2021!), we need to give ourselves time to experiment. Time to think about what the problem could really be and what else we could really do about it so that we’re certain we get to the right answer. If the past two years have given us anything, it’s the opportunity to take a moment to make sure that we’re solving problems the right way and not the wrong way.