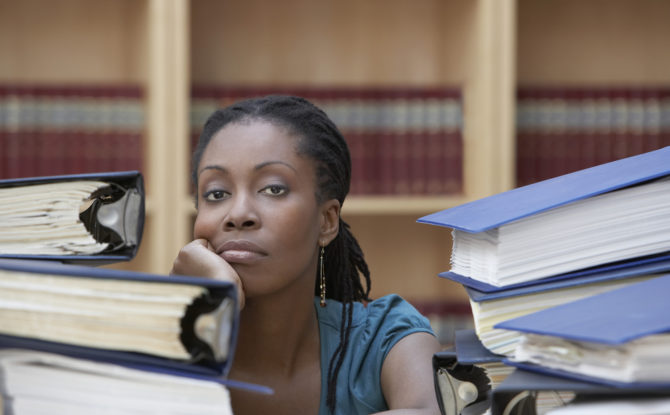 How Your Stress Might Be Costing You (Big Time!) At Work

Think you have your stress symptoms under control? Think you do a good job of masking your frustration at your boss and coworkers? Think no one else notices the pressure you feel?

Most of us aren’t very good at hiding it, when we’re stressed. We leave little clues, like a huff in our voice or a death grip on our armrests. I promise you, people notice.

Why do we think we should hide our stress? Well, many workplaces recognize that stressed-out employees produce poor work quality, provide bad customer service, and make lousy colleagues. (Some work environments still romanticize stress as a sign of being important, but that’s a whole different problem!) We think we need to hide our stress so we can show that “we got this!” and that we’re a rockstar who can juggle anything given to us.

If you’re shoving your stress down thinking no one is noticing, you’re wrong. The little stress signals you’re giving off are speaking volumes to the rest of your colleagues, and they could cause you problems at work, in three major ways:

You’ll Be Labeled “Not a Team Player”

When you’re under stress, a natural reaction can be to pull away from the group, in order to avoid lashing out or feeling further annoyed. It is a good idea to stay away from situations that will trigger an unprofessional stress response, but sometimes your instincts will cause you to retreat too much.

You might not even notice that you’ve pulled away from the group, but your boss probably will. She won’t necessarily realize you’re under stress (because you haven’t told her because you want to get that big promotion so you want to look like you can handle anything!) She’ll just see that you aren’t contributing during meetings, or assisting your coworkers the way you used to, and she’ll think you’re not interested in being a contributing member of the team. Uh oh…

Get The Free Stress Tool

You’ll Drive Away Your Inner Circle

But you have one team at work you can always count on, right? Your work buddies! There’s a group you can be honest with, and share your stress.

See, research shows that “venting” is actually an unhelpful form of expressing your frustration with a problem, because you let off just enough steam that it keeps you from actually getting up the energy to make headway against the problem. Think of it like a pot of boiling water that never quite boils over, because you’ve “vented” the lid just enough. If you stay boiling long enough, your friends are going to distance themselves from your negativity. Yikes…

You’ll Get Passed Over For That Promotion

You’re trying to hide your stress levels precisely because you want to get ahead at work. But those hidden “tells” that you’re letting slip are ratting you out. Your boss is noticing the changes in your behavior, and even if he does realize it’s stress-related, he’s wondering why you haven’t approached him about it.

Successful people often (not always, but often) get to where they are by admitting they can’t do everything themselves. My husband, an entrepreneur, is a great example of this for me. He always reminds me that he hires people far smarter than he to do their jobs, and he relies heavily on them when the workload gets high. If your boss thinks you can’t admit when you’re stressed and can’t ask for help, he may think you aren’t qualified for that promotion. And he may (rightly!) be worried that you don’t have enough appropriate stress-management techniques to handle the job. Bye-bye, corner office!

Even if you think you’re hiding your stress from your boss and coworkers, you probably aren’t. And the symptoms of your stress that are showing are probably hurting you worse in the long run than just admitting you’re stressed. Come clean if you’re feeling stressed, because then you and your team can come up with appropriate ways to successfully get you back in peak form.