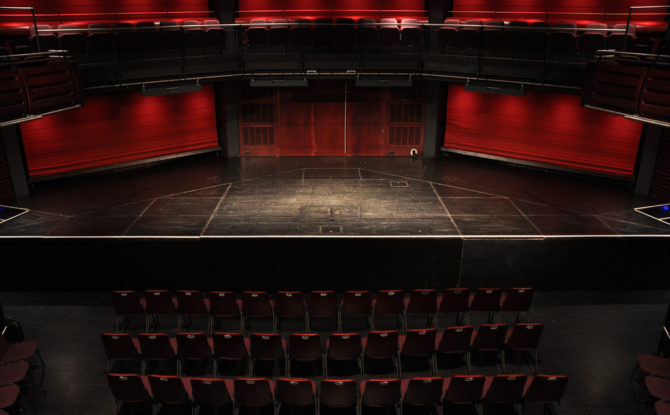 “I don’t want to do this anymore.”

The thought didn’t hit me all at once; it crept up on me over a few months, until it was right behind me, breathing its hot breath down my neck so I couldn’t ignore it anymore. For years I had been lugging my tap shoes and music books to class, running lines with a rehearsal partner late into the night. Taking voice lessons and ballet lessons and pushing my voice to hit a high belt, all in the hopes of one day taking center stage on Broadway.

The thought didn’t even hit me at a low point, as giving-up thoughts often do. On the contrary, I had enjoyed plenty of recent success. But the voice was still sneaking up on me that whole time, until one day I said out loud, “I don’t want to do this anymore.”

I was only 21 years old, but as I said it out loud, I realized why I was finished: pursuing a career as an actress made me feel unimportant. Every single audition, I was surrounded by women who were prettier than I was, who could sing higher and kick higher. And even when I DID get the role, there was always this pervasive knowledge that if you said the wrong thing to someone in power, you would instantly be replaced by the line of 85 other women just like you who were waiting to take your role. I felt replaceable.

I turned to my roommate, my best friend, and said, “I want a job where people are glad I showed up. They don’t have to give me a standing ovation when I leave every night, but I want them to say, ‘Thank goodness YOU’RE here today. We couldn’t do this without you. I don’t feel that way about theatre.” She questioned me for the better part of an hour, testing my resolve and making sure I wasn’t just feeling low self-esteem. I finally said, “You know what, when I was a kid and thought I wanted this job, I thought being famous sand being important was the same thing. Now I know being famous and being important aren’t at all the same thing, and I just want to be important. Being famous doesn’t matter.”

I moved on to jobs where I felt important, and I WAS important. I solved problems others before me hadn’t solved. I earned praise and respect. But I still wasn’t immune to the shame of having given up on my dream. Years down the road, I received an out-of-the-blue email from an old friend high school friend  – a friend with whom I had once had a very kind relationship. “I’m so glad you decided to pursue a more traditional field,” she wrote. “I knew all along that it felt irresponsible and unrealistic to try to pursue a career in theatre, which is why I never wanted to do it professionally. I’m glad you finally realized that.” I pushed back from my computer as if her words were acid. I hadn’t given up on my dreams because they were unrealistic, I wanted to shout. I chose to leave the field! I could have made it if I had wanted to!

I wondered: did people think I had given up because it was too hard? Did they judge me for not being strong enough or willing to work hard enough? All those people – my parents included – who had supported my dreams… had I let them down?

I struggled over that email for two weeks. I wondered if I had chosen the wrong path year earlier, and if it was too late now. But smack dab in the middle of my existential shame crisis, I got the reminder my work was indeed important, when I was hired to be the spokesperson for a local nonprofit.

I’ll likely never be famous, in the way that 12-year-old Courtney planned to be. But I’m far more important than I ever imagined. In my work as a speaker and author on resilience, I have the good fortune to touch lives with my words. After one of my recent presentations, a woman left behind a note for me at the table where she had been sitting. “You made the struggle of becoming a mother at age 14 make sense in my life,” she wrote. I keep that note by my bedside, although it’s a bit smudged where my tears fell on it as I read it the first time.

Letting go of your dreams isn’t easy. It means coping with grief and loss. It can mean debt and financial struggle. It can mean redefining who you are and your place in the world. But changing your path can also mean achieving significance in a way you never imagined.

If you’re struggling with a dream that isn’t loving you back, ask yourself if you’re pursuing the correct goal. Has getting what you want become an obsession, rather than a passion? If you wouldn’t have to feel shame or guilt over “giving up,” would you have chosen a different path by now?

Pursuing significance over fame is the best decision I ever made. And I’ll never give up on that.