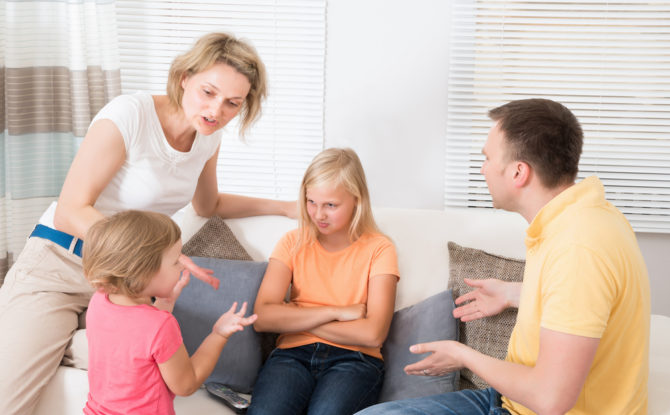 3 Ways to Stop Squabbling At Home

Every family has its fights.

Have you ever been in a fight with your teenager or pre-teen and felt like “this just makes no sense! They’re not making any sense!”? My son first joined our family as a teenager. The first year or two was the “honeymoon period,” where we avoided the typical teenage disagreements. But before too long, we caught up to the typical family dynamic, and suddenly Mom and Dad knew absolutely nothing and our advice was dumb and we were arguing as though we’d been a family forever. (It’s a weird milestone to celebrate!)

I remember one of our first big disagreements, and I was just flabbergasted trying to follow my son’s train of thought. Neither one of us was making any headway, and in a flash I realized “I don’t need to understand his entire thought pattern. It doesn’t matter if it doesn’t make sense to me. It makes sense to him.”

As adults, we get pretty familiar with our own thought processes. We can track our frustrations back to their root causes, if we take a moment to try. But even WE sometimes have trouble articulating our thoughts and feelings when we get upset. Can we really expect kids and teens to be better than we are?

Instead of jumping to conclusions about why your kids are upset, check your assumptions. Ask them questions to understand what’s really behind their frustration. By questioning your kids, you’re doing two things: 1) understanding the real root causes of their anger and 2) giving your kids an opportunity to speak up, which helps them feel less powerless and therefore less frustrated. When you ask questions, you naturally defuse the tension, and you stand a real chance of keeping the same problem from coming up time and time again.

When your children are at each other’s throats, it’s natural to want to send them both to their rooms. And you probably want to cancel any fun plans you had for the day, too, right?

In theory, sending them to their rooms is intended to give them time to cool off and mellow out (and it keeps you from having to listen to them yelling!) But when they go to their rooms in the middle of a conflict, your kids just go up there and stew on the fight. They relive it in their minds, and they run the risk of fueling their anger or feelings of hurt even further.

Sending them to their rooms and canceling activities causes kids are missing out on a key strategy that can help stop conflict: positive interaction. Research shows that even a single positive interaction can help cool down a conflict. It seems counterintuitive to “reward” kids for fighting, but facilitating some kind of fun activity where the children have to work together, will help the conflict pass sooner and with fewer lasting effects on their relationship.

Life is stressful and hard. But you can’t really yell at the dog for eating your slipper, or the mailman for waking the baby, or the checkout guy who overcharged you for whole wheat pasta but you didn’t realize until you got home and it was too late because you’re way too tired to go back to the grocery store now.

So you turn to the nearest adult and take it out on THEM. Because THEY promised to unload the dishwasher and forgot. Again.

It’s common. We all have days where we give eeeeeeeveryone else the benefit of the doubt besides our partner. But taking your stress out on your spouse leads to a feeling called “contempt,” which psychologists consider to be the #1 predictor of divorce. When you feel contempt for your partner, it goes beyond frustration into a feeling of disgust, like the person isn’t worth your time or even human.

To avoid feeling contempt for your partner, especially when you’re disagreeing, remember to focus on shared goals. It helps to verbalize those shared goals, so say something like “I think we both agree that we’re happier when the house is reasonably tidy. Is that fair?” Or “I know we both want the same thing: to have a comfortable amount of money in savings.” You may disagree on what “reasonably tidy” or “a comfortable amount” is, and that’s what the disagreement can focus on. But you can keep coming back to your shared goal, when you feel yourself getting pulled into anger. And remember, a shared goal can be as simple as “We both want to have this difficult conversation without yelling”!

There’s no such thing as a conflict-free home, but you CAN make conflict healthier and more productive!